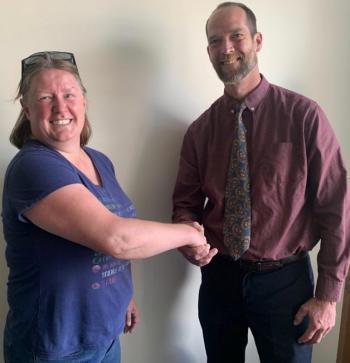 After 13 years as an assistant principal, Tom Landberg has a school of his own. Landberg, 46, of Durham is the new Edgecomb Eddy School principal. During a special July 7 meeting, the Edgecomb School Committee unanimously voted to hire him to the vacant principal job.

Landberg succeeds Dr. Christina Boursaw who served for one year. Landberg grew up in Wells and graduated from Wells High School. He received his bachelor’s degree in secondary education and a master’s in education leadership from University of Maine. Landberg has spent 24 years in education. In 2009, he became assistant principal at Philip W. Sugg Middle School in Lisbon for four years. For the last nine years, he has served as Gardiner Middle School’s assistant principal where he also performed athletic program duties.

Becoming a school principal is a long-held career objective for Landberg. “I’m so proud of becoming the Edgecomb Eddy School principal. When I saw the banner thanking the staff, it showed me how much the community supports education. So this is the place I want to be,” he said.

School Committee Chairman Heather Sinclair was on the principal interviewing committee. She described Landberg as the “clear, top choice” during the search. “It’s always challenging to find a new building administrator. He has a real interesting background dealing with a mixture of students along with his coaching experience. The search drew several highly qualified candidates, and we are lucky to have hired someone of his caliber,” she said.